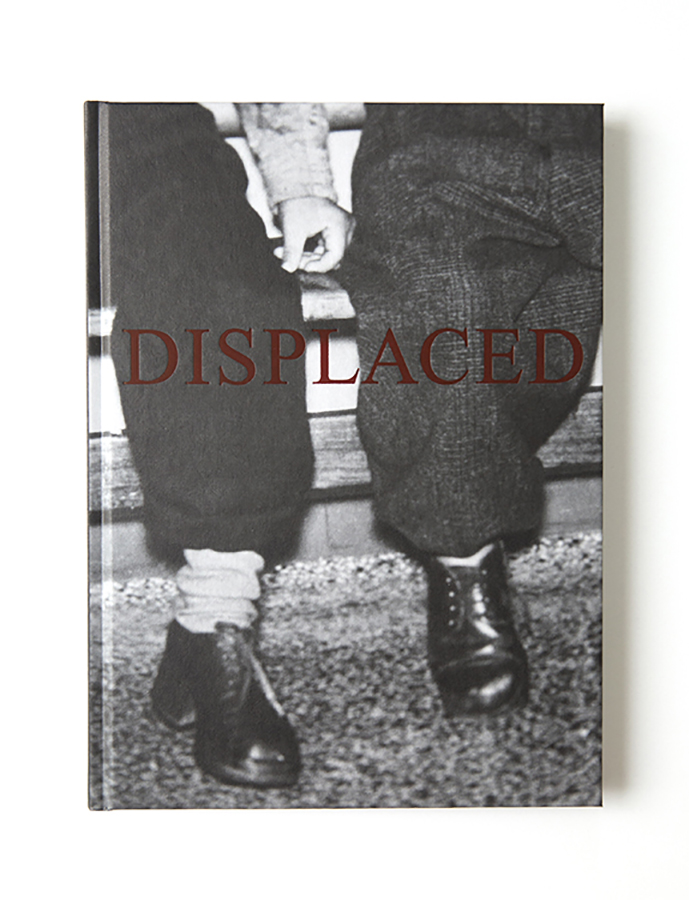 40 euro plus shipping
The book can be bought directly from writing to mail@tinaenghoff.com
as Dogwalkbooks.com currently is under construction
Suggestions to other places where the English / Greenlandic edition can be bought:
http://fragmentphotobooks.com
https://uk-webshop.uni.gl
http://www.atuagkat.com

Danish / Greenlandic edition, ISBN 978-87-7695-655-4
Forlaget Vandkunsten in collaboration with Ilisimatusarfik/University of Greenland, 2021
The book can be bought directly from www.forlagetvandkunsten.dk

Displaced, is based on research, site-specific art activism, outreach and local collaborations in Greenland, and it examines the archive's role in relation to personal history. The research takes us through two paralell worlds, David's memories of his stay as a child in Denmark in the beginning of the fifties, oral history, and written statements about him and Nanortalik (his place of birth) in the Danish archives. Displaced is based on postcolonial identity and tales of losing ones roots, belonging and language - but also of regaining ownership.

From the text by Louise Wolthers: Listening to Traces
The story unfolds between a detail of a snapshot from Refs­næs Coastal Hospital in the mid-1950s and a 3D visualisa­tion of stones from the beach below the hospital a lifetime later. Between David Samuel Naeman Josef Kristoffersen, one of the children in the photograph, and Tina Enghoff, who has gathered the stones and archival material included in Displaced. David Kristoffersen’s story can begin in different places at different times. Like a thin yet strong thread, it ties Greenland and Denmark together, weaving between the rods of colonisation: displacement, annexation, and silencing. David Kristoffersen’s story is, however, first and foremost his own, and he relates his memories partly in his own voice, and partly by allowing Tina Enghoff to weave new threads into the story in the form of archival material, documentation of physical places, and visual manifestations of states of mind. Individually these traces are subdued and almost negligible, but together they form a chorus of testimony to colonial history that has deep resonance.

From the text by Inge Høst Seiding: Finding Yourself in the Archives
Displaced – something removed from its starting point. From its home. Something lost, something gone wrong. Dislocated.Dislodged. Here we are dealing in a dual sense with two apparently disparate entities – people and archives – but also with the links between them. David Samuel Naeman Josef Kristoffersen’s story reveals both sides of this dual sense of displacement – displacement in the memory of the individual, and displacement in the memory of the archives.
In David Kristoffersen’s story, like that of many others, an almost forgotten, hidden and perhaps repressed experience has had a lasting impact. Archives often form part of the search for missing pieces in the picture of a long-past yet important story. Not because people cannot remember every detail, but because they are looking for answers. Answers to questions that could not be asked at the time something happened. Archivists experience all this from the outside, but it is precisely such questions that lie – directly or indirectly – in most of the requests that land on the desks of archives worldwide.

From the text by Peter Berliner: When the Place Finds Us
A story cannot be owned. It can be shared, and in being shared have a life between us. It is in the space between us that the story is given life. Otherwise it dies of lack of oxygen, withers, is muffled in words on yellowing pages or myriads of forgotten files in forgotten archives. Like the old paperbacks from the 1950s still to be found in moulder­ing cardboard boxes in the attics of old wooden houses in Greenland’s abandoned villages, stories that are not heard become yellowed, and their spines crack as the glue that once held them together is transformed into a yellowish, porous amber. If you open the book the amber breaks and falls into thousands of pieces, and the yellowed pages with their truths and lies fly like a flock of birds, briefly liberated with parchment-like whispering into the air before landing flat on the floor in deep, disturbing silence. Only the silence – and the disquiet – remain.